During a "Curator Is In" session, a woman with whom I visited told me that her daughter discourages her grand-daughter from collecting. The grand-daughter loves to collect and has little collections neatly arranged all over her room. The daughter hates the mess and the dust on the little objects.

The visitor said that she had to bring both of them to Chicago Children's Museum to see Michael's Museum to show them how wonderful collecting can be. I suggested that a glass front cabinet be found, new or old, and the Grand Daughter's collections could be arranged there. Cabinets are easily available at antique shops, Target, K-Mart, Michael's, Hobby Lobby. All problems solved - at least theoretically. 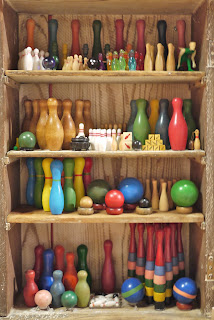 Posted by Michael Horvich at 1:16 PM